Banjo and Kazooie: Race to the Death 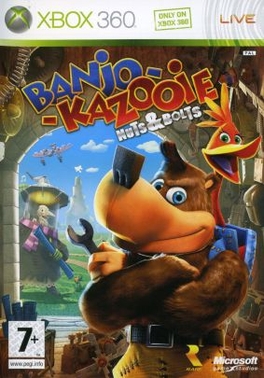 Have you ever heard of Banjo and Kazooie: Nuts and Bolts?

If you haven’t I’ll start from the beginning. Banjo and Kazooie was a 3d platformer released for the Nintendo 64 in 1998. It was quirky, it was funny, it was well designed, had a rich environment, and most importantly it was loads of fun. The developers at Rare decided to make a sequel on the N64 in 2000… and it was another smash hit. It had more exploration, more story, more platforming, more quirkiness, and most importantly another great load of fun.

Move forward to 2008, Microsoft publishes Rare’s 3rd game in the series on the XBOX360. It comes out completely monstrous. This. Isn’t. Banjo. And. Kazooie. Instead of a fun platforming game that the series was known to be Rare delivered a car building game. There was outrage among the Banjo and Kazooie fans. Safe to say when I played it I was a little more than disappointed.

But then I grew up and when I got into college I played the game again, and I’ll admit, I realized how great of a game it is. The car building mechanics are great, the story is hilarious, the missions and objectives are challenging, and the thing I forgot about when I first played it, I had lots of fun.

I’m not a professional critic (whatever that means) but unlike all the reviews it gets from the Banjo and Kazooie fans, I would rate Banjo and Kazooie: Nuts and Bolts a solid 8-9/10. It isn’t Banjo and Kazooie, and that’s the problem. This was a great game with fun and original mechanics that were never seen before in a game.

It isn’t Banjo and Kazooie, and that’s the problem.

Nowadays gamers everywhere look for games with new and interesting mechanics. I would argue that the build and drive system of BK:NB is refreshing and amazing, and it makes the game unlike anything else, something entirely original. Except it has one thing holding it back. They decided to put the name Banjo and Kazooie on it.

This game is unlike every other game in the series and doesn’t belong in it, but they gave it the IP. Microsoft probably did so to promote sales, knowing that there was already a large fanbase that was excited to get there hands on the next Banjo and Kazooie (if it were to ever be released).

And by giving it the name they won. Not to be anecdotal here, but I wouldn’t have bought a car building game on my own, no matter how great it sounded. But the moment I heard Banjo and Kazooie, I said to myself, “Self, we are going to get that game.” And young me, playing that game hoping for the Banjo and Kazooie’s of my childhood, was disappointed. I wasn’t the only one too.

To reiterate though, I now love this game. It is easily one of the best gaming experiences I have ever had.

Ever since my replay of that game, I have tried analyzing the things I watch and the games I play more objectively. It is easy to get caught up in pointing out the inconsistencies in a series or a remake and forget about what it is all about. The point of any entertainment is to be entertaining. Media created for the sole purpose of entertainment is first and foremost entertainment, and then it is art.

Banjo and Kazooie: Nuts and Bolts is a video game designed for the sole purpose of entertainment. I would argue that Nuts and Bolts as well as any other game in the Banjo and Kazooie series is art as well and should thus be criticized accordingly, but only after objectively answering the subjective question,”Was this game fun?”

This brings me to current and tantalizing topic of today:
Was the Deathnote live-action movie terrible?

A lot of Netflix reviews seem to think so, but I’m reluctant to say so.

To give some backstory. Deathnote is a well-praised anime that begs the question, “Is it alright to be judge, jury, and executioner if you have good intentions?” The main character Light Yagami, a highly intelligent Japanese high-schooler with good intentions, gets his hand on a notebook that can kill anyone with the wave of a pen. Upon receiving this he decides to rid the world of the trash, and what ensues is a mental cat and mouse chase with the world’s best detective.

Most would say that it is art and philosophy, and I would definitely agree. First and foremost though, it is very entertaining to watch. The show has good meaningful plot, great character development, and an interesting original story. Beyond this, being an anime it is a direct adaption of the manga (Japanese graphic novels). And although the manga has loads of content, the anime varies only slightly from it. And this is where the problem is.

My belief is that the Deathnote live-action movie was mismarketed. Some of the fans of Deathnote believed they were going to get an hour and thirty minute live action adaption of a 37 episode anime. This would be like hearing that the Banjo and Kazooie series that you knew from your childhood is getting a third installment, and so you rush to Gamestop and put down a pre-order for it.

Now you know where I am going with this.

I saw the Deathnote live-action movie and I would rate it a solid 7-8/10. It was an entertaining action movie, that’s all I got to say. The movie varied so much from the anime and the manga that there is no way the producers sat in a room and thought they were making a scene for scene adaption. What they knew they were making was an American action movie adaption with heavy Deathnote themes. And that is where the ultimate problem is. It isn’t Deathnote.

I could write another entire blog post pointing out all the inconsistencies, but I will just have to give the brass tacks that supports my theory. The movie is now set in America, instead of Japan. The main character is a social misfit, rather than an upstanding member of society. They added an entire subplot where the main character gets a girlfriend who helps him. The kid is named Light Turner instead of Light Yagami (this goes back to being set in America).

All my point really is, is that it doesn’t seem fair to judge media based off it’s predecessors, without first assessing the present media for what it is.

In order, the way I review anything that is meant for entertainment purposes is by first asking the question, “was I entertained?”
From there I might ask more questions, but those would be based off the context of the situation. Stuff like:
“What did they say this media would be?”
“Did they purposely deceive me?”
“Is it supposed to be an adaption, a sequel, or a fresh concept?”

By asking contextual questions after, you can more objectively assess if you wasted your time or truly enjoyed the entertainment for what it is and not what it was or could be.

This is not a lifestyle blog.